An Amazing Cabbage Collection from a Skyrim Player 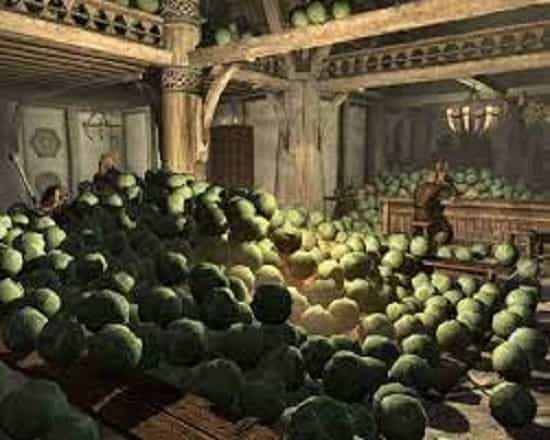 An Amazing Cabbage Collection from a Skyrim Player:  Most people don’t give digital food much thought in games unless they need to stay healthy, like in BioShock. However, the cake from Portal and the mushrooms from Super Mario Bros. are iconic food items in video games.

Most of the time, it’s just there to make the world seem more real. The same thing can be said about The Elder Scrolls 5: Skyrim. Many fans might not think it’s necessary unless they’re playing in survival mode.

However, people can break their parents’ rules and play with their food instead.

A person called AggravatingBreak3311 has shared a screenshot from Skyrim. It shows a standard interior location from inside the game, except that the room is full of cabbage.

It looks like there are many green, leafy vegetables that the player has been collecting so far, with a lot of them piled up in one place. Because it’s not clear why they did this,
There have been a lot of re-releases of this game over the years.

An Amazing Cabbage Collection from a Skyrim Player

It’s possible that the original poster was looking for something new to do while playing the game. However, it’s also not the first time that something like this has happened, making it even more enjoyable. Recently, a Skyrim player decided to fill Breezehome with cheese, making a waist-high sea of wheels and wedges that cover the entire floor of the Whiterun home.

Some people in the comments called it “Brie’s Home” and “Cheese Home.”
Skyrim’s survival mode makes eating and drinking a must, so players will need to find food and drink along the way to stay alive.

Another thing it does is make it possible for players to die of frostbite if they don’t have the right clothes or don’t look for warmth and shelter. As a general rule, the survival mode makes the game more interesting for people who like to play.

With the Skyrim Anniversary Edition coming out late last year, Bethesda has able to get even more life out of this 10-year-old game. Some people want the next Elder scrolls game more than anything else in the community. However, AggravatingBreak3311 is still having fun in Tamriel, so it could be long before Skyrim goes out of style.