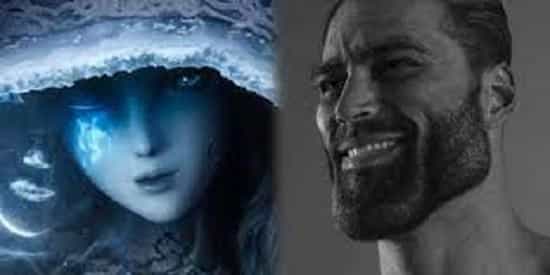 Character Creator Users Are Creating GigaChads:  FromSoftware’s collection of action RPGs may not be for everyone, but there’s no denying that they are some of the most ambitious video game projects in recent years. Elden Ring. The studio’s most recent game, combines the detailed environments of previous games with an open-world design to create a unique experience. The game’s character creator, on the other hand, is just as ambitious, as shown by a few Redditors.

Sekiro: Shadows Die Twice is the only modern From Software RPG that doesn’t have a character creator of some kind. It allows players to make a lot of hideous monsters. But many builds require head-to-toe armor that hides what the player has created.

That may still be the case for some people who play Elden Ring, but now. Just like the fan who made a Wood Elf from the loading screens of The Elder Scrolls 5: Skyrim, FromSoftware fans can make complex characters based on both real and imaginary people.

This example comes from Reddit user u/NickDaGamer1998, who made a perfect picture of the GigaChad meme. People who haven’t seen this meme come from a photoshoot with Russian model Ernest Khalimov, who became a kind of male icon in the late 2010s.

If you go on the Elden Ring subreddit, you’re likely to see his picture a lot. He’s often seen promoting some of the community’s most ridiculous ideas.

The Reddit user’s recreation of the meme in Elden Ring must have taken a long time because it’s about as close to the actual picture as it could be.

Because of the grayscale skin tone and the jawline that looks like it’s almost too big. Anyone who knows the GigaChad meme would know who this is. Demon’s Souls and Dark Souls have unique PvP invasion systems used in Elden Ring. Those who have to fight against this creation are in for a rough time.

Elden Ring has 10 different classes, and u/NickDaGamer1998 thought Bandit was the best for GigaChad. However, stealth and ambush tactics don’t seem like the best choice for a man who is usually thought of as a bully. Because Elden Ring’s so-called “purposeless” Wretch class fights with a wooden club. It seems like a better class for this game. Even though it has the worst stats, this class is more aligned with the meme.