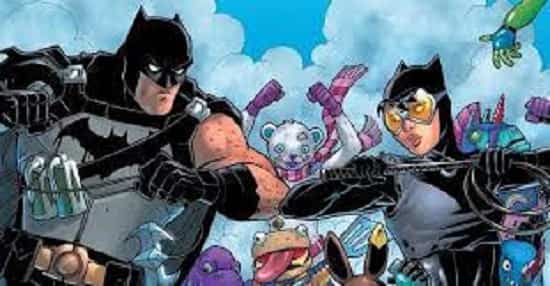 Batman and Fortnite may reunite soon:  While the free-to-play Battle Royale mode was what made Fortnite famous years ago. It has updated and added to many times over the years to keep it going strong. For most people, the main reason for this is Epic’s use of crossover events with other franchises and IPs.

This isn’t just because the seasons change so often. Gaming and cosmetic changes have also added. This has also led to significant events like the Global Music series, including Marshmello, Ariana Grande, and more.

Over the last few years, Epic Games has seemed to be getting more and more into cosmetic microtransactions in everything from video games to TV shows to movies and more. Marvel has been a big part of that because they have made a lot of different character skins available for people to buy, like Gambit and Rogue from the X-Men.

Many times, new cosmetic skins release simultaneously as new movies or TV shows. This seems to be the case with the most recent Fortnite rumor.
A new rumor about Fortnite comes from Twitter user @KwingReviews. It says that the Batman played by Robert Pattinson will show up in the game.

Batman and Fortnite may reunite soon

KwingReviews later said that their source told them that the Batman movie skin would be coming to Fortnite in the next week or so, but they didn’t get any more information from the source.
People who want to see the new Batsuit in Fortnite should take this with a grain of salt, but there is some good news for those who want to see it.

This isn’t coming from Epic or Warner Bros. Last summer, the source that KwingReviews got his information from correctly predicted that Deathstroke would added to Fortnite, so there’s a little history here. It’s already released that Batman is a comic book character. Fans hope that Catwoman and the Riddler will also make into movie versions.

There have been a lot of rumors and franchises that have been going around as well. If The Batman is the next big thing, fans won’t know for a while. Ezio Auditore da Firenze, a character in Ubisoft’s Assassin’s Creed game, may have had his look spoiled by leaked material.

It’s even possible that John Cena’s character, Peacemaker, could join the popular online battle royale game at some point in the future, as well.