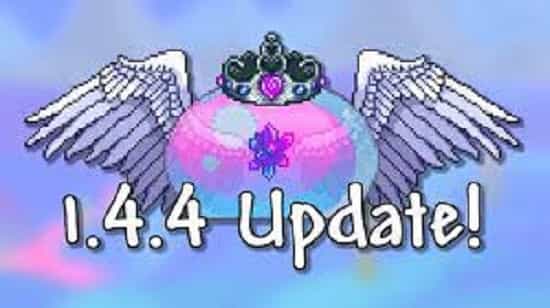 Terraria Releases a Surprising 1.4.4 Update:  There was no expectation for an additional Terraria release to coming soon. However, nobody shock when the developers announced another Terraria release.

Although it may sound absurd and untrue at first. It’s an announcement that describes the long history of this legendary platformer has gone through regarding how it dealt with its post-launch material.

Fans of older versions that had played Terraria recall when 1.1 intend to be the final patch in content for the game.

While 1.1 introduce, gamers have grown and enjoyed the recent Terraria game experience since the introduction of Hardmode. The game has continued to expand the gameplay experience significantly. By introducing three more massive content updates: 1.2, 1.3, and 1.4 (Journey’s End).

With this in mind, it’s no delight that Terraria has awarded its “Labor of Love” award on Steam, which is also the title of the forthcoming update announced the night before.

It’s being covered by ChippyGaming, the iconic voice of Terraria’s players’ community. The latest patch is more minor in its scope and focus on giving some nice improvements to the game’s less exciting weapons. In addition to some hidden things for players to find when the update release.

One of the most significant balance changes implemented in 1.4.4. The weapons getting an upgrade is Flatiron, Frostbrand, Dark Lance, Frostbrand, Flatiron Scourge of the Corruptor along Star Wrath.

For instance, Star Wrath’s projectiles don’t have an immunity timer that they share. Allowing them to strike only one target with no awkward delay. This will dramatically enhance the effectiveness of the sword in fighting bosses.

The update adds some improvements to the quality of life that improve the rewards for the Angler’s quest and the spawning of the Plantera Bulb in the Underground Jungle biome right after winning those Mechanical Bosses in the early Hardmode.

Terraria’s crossover event and Dungeon Defenders 2 have also received much-needed attention. Right-clicking on the Eternia Crystal will allow players to skip the waiting for the next wave. The items that sold by the Innkeeper who sells Defender Medals also have had their price cut (up to 40 percent).

Players have always asked for the introduction of the proper Endgame weapons for each Terraria archetype of gameplay. A Zenith for each class, in a sense.

Even though Terraria mods have come up with their versions of these weapons, there’s an expectation among the community that the items revealed in the latest patch will be the same.

Terraria has release and is now available for download on Mobile, PC, PS4, Stadia, Switch, and Xbox One.