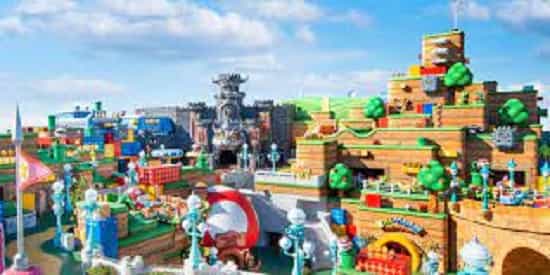 It’s not surprising that many fans are excited about this news. After Super Nintendo World opened last year, they have been waiting for a Nintendo theme park to open in other places.

If you live in the US, you might visit Super Nintendo World in Japan. It opened to the public on March 17, 2021.

Nintendo’s Shigeru Miyamoto gave a tour of the Japanese theme park before it opened. It has well-received by both critics and people who have been to the theme park.

Super Nintendo World will open in 2023 in a new area of Universal Studios Hollywood, California. This is the news from Universal Studios today. Visitors will be able to play with popular Nintendo characters like Mario, Luigi, and Princess Peach in areas like Warp Pipes, Piranha Plants, and Bowser’s Castle at the theme park.

Other parts of the theme park will feature more Nintendo characters, like Yoshi’s Adventure and Mario Kart: Koopa’s Challenge rides, which use augmented reality to show feelings and items as you race to get the winner’s trophy.

In addition, the Japanese version of Super Nintendo World has said that there will be a new Donkey Kong expansion, which will add new roller coasters and interactive games.

As for first-party games like Mario Kart 8 Deluxe, millions of people around the world still play them. The opening of the Super Nintendo World theme park in one of Nintendo’s most important countries is likely to be a big hit with both new and longtime fans.

Some people may think the park is another way for Nintendo to make money from people who already pay up to $50 for new games.

It will be open at Universal Studios Hollywood in 2023.