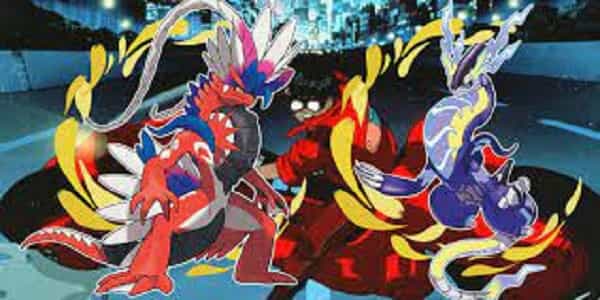 However, Sprigatito, Fuecoco, and Quaxley aren’t the only ones receiving fanart treatment – the new legendaries are incredibly fascinating.
Scarlet’s and Violet’s legendary Pokémon are Koraidon and Miraidon, respectively.

Koraidon’s chest features a tire-like bulge (seen on the left in the image at the top). Miraidon’s (right) hips are shaped like jet engines.

Reddit user ArkVinn imagined what these well-known patterns might look like in “vehicle form” and came up with some unique ideas. For example, Koraidon’s tail curls up to create the second tire in ArkVinn’s picture, allowing it to zoom over the ground face-first like a motorbike.

The tail of Miraidon connects all the way around to create a single spinning energy wheel, which is subsequently driven by its hip engines.

The idea that the new legendaries may go full Transformers and wrap up into a second form is intriguing. In Pokémon, there’s already a lot of precedence for this kind of thing.

Since Generation III, Castform has changed its look to reflect the weather, while Cherrim in Generation IV has done the same. The list goes on and on, with legendaries and mythical’mons like Keldeo and Genesect.

Even if it’s just a hypothesis at this stage, it’s perfectly plausible.
It’s one of several Scarlet and Violet fan theories.

Koraidon and Miraidon’s vehicle designs tie into the Past and Future Theory, speculating on the upcoming game’s conflicting time eras. For example, one of the variations between the Scarlet and Violet versions might be the separated periods.

This September, we’ll find out. The release date for Pokémon Scarlet and Violet is November 18th. Both Generation IX versions will be unique to the Nintendo Switch.