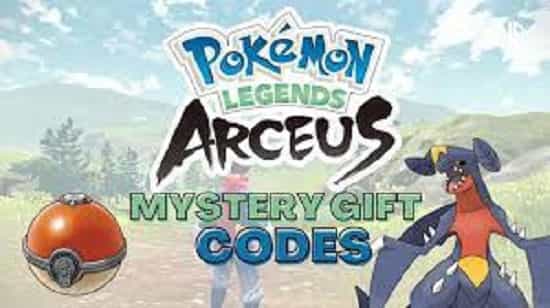 Players Get Free Items With Arceus Mystery Gift Code:  For over a month, Pokemon Legends: Arceus has been out. Many fans have been playing it and having fun. It’s a way for the Pokemon Company to say “thank you” to its fans. They’ve given them free items until March 31.

If you’ve been playing Pokemon Legends: Arceus, you’ve been exploring the Hisui region as you catch, fight, and level up Pokemon.

The Pokemon Company recently said that two new games, Pokemon Scarlet and Violet, have been in development and are expected to be released on the Switch at the end of this year.

However, that doesn’t mean that the Pokemon Company doesn’t think about the game release at the start of the year.

Free update: “Daybreak” came out on February 27, the same day Pokemon Scarlet and Violet were shown off. Using the code “ARCEUSADVENTURE,” players can get 30 Ultra Balls, 30 Gigaton Balls, and 30 Jet Balls.

They can get them by going to the Mystery Gift menu and using the code. As a follow-up, a secret code not show during the presentation. It allows players to get five Grit Pebbles and 5 Rare Candies, and 5 Star Pieces.

Players will again have to go to the Mystery Gift menu and type in the code, “THX4Y0URHELP”. They will then be able to get these items.

As the game progresses, these items can help players a little. A Pokemon’s effort level rises between levels 6 and 8. Rare Candies raise a Pokemon’s level by one, and Star Pieces can sell for a lot of money if the player wants to make a lot of money.

As a player, it is excellent that you can get items from gifts instead of buying or finding them. People who play Pokemon Legends: Arceus can get free articles, as well as a new Daybreak update, to show how much the Pokemon Company still wants them to enjoy the game.

A lot more codes to get free items should give out through the year and when Pokemon Scarlet and Violet come out. It won’t be long before they can enjoy all of the new things that the Daybreak update has to offer, finish Pokemon Legends: Arceus, and keep exploring the Hisui region as they capture and fight Pokemon.

If you have a Nintendo Switch, you can play Pokemon Legends: Arceus.