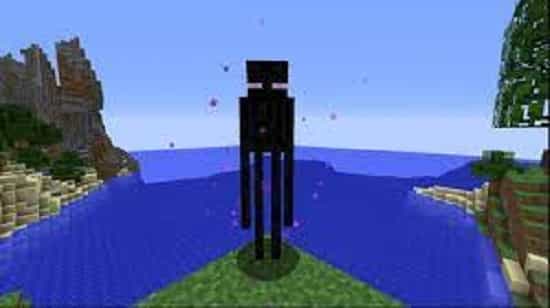 Minecraft Player creates an island resembling an Enderman:  It is not surprising that the procedurally created worlds in Minecraft are huge. This is why players encounter so many strange creatures and places while exploring.

Like the Phantom and Axolotl, many interesting mobs have been added to this game over the years. The Enderman is one of the most recognizable creatures.

The Enderman is one of the most popular mobs in Minecraft. These strange black creatures have purple eyes and teleport. They enjoy stealing blocks from the structures created by players. This can cause problems.

They can be aggressive when provoked, but they also have water. To keep the mob from noticing you, you can wear a carved pumpkin. One fan recently decided to pay tribute to the classic monster in Minecraft.

A Reddit user named nayakura8080 posted a collection of pictures from a recent project in Minecraft. The final build was impressive, as it appeared that an Enderman was holding a large grass block.

The creator replicated the iconic mob’s look and made it functional. The long arms of Enderman were used to create pathways leading to the huge grass block that it was holding. They also gave the island a natural appearance by filling it with lush foliage.

The grass block even has a waterfall. The creator also provided a link to the island on Reddit, which allowed anyone who wanted to see the build.