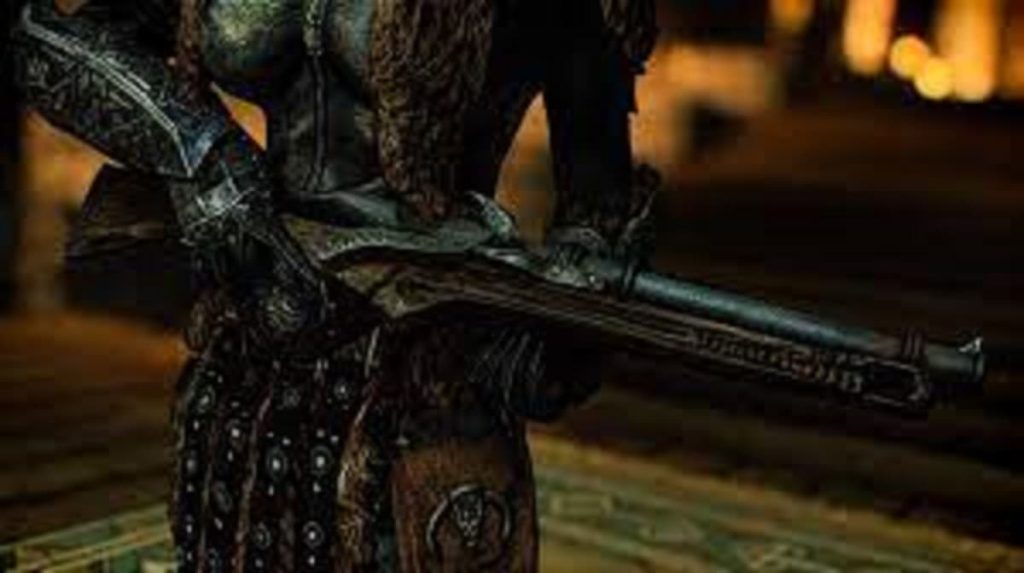 Guns With Lore-Friendliness Added to Skyrim: With a flourishing community adding all kinds of weird content to Bethesda’s timeless fantasy game, Skyrim, it is full of beautiful modifications.

If you know where to look, Tamriel has a ton of non-Skyrim stuff, from Star Wars to Just Dance.

Ever felt that magic wasn’t nearly long-range enough or that the world of Skyrim needed some weapons from Fallout? The modding community has you covered with various weapons and backstory that fits well into the Elder Scrolls plot.

The firearms use crossbows’ archery benefits and animations, and most materials may use to make rifles. Even NPCs have been known to carry these weapons in the region of Skyrim.

The history of the weapons that are joining Tamriel’s armory is what I find most intriguing. After the Empire is compelled to sign the treaty after the Great War, the plot diverges.

The Imperial high command “understood the huge advantage that Altmeri battlemages had over conventional massed troops after the destruction of the Great War, being able to destroy organized forces with their magic quickly.”

As Altmeri battlemages are very costly and time-consuming to train—two things the Empire lacked—the Emperor, Titus Meade, sought to devise a new technology to offset their superiority at range.

“The Synod’s records had the solution. A little iron ball and a metal tube see in old Dwemer designs. The ball launched with great power when mix with fire salts and set on fire.”

These developments made it possible for practically anybody to pick up a weapon and fire it at an opponent from a great distance. Rifles quickly spread like wildfire over Tamriel as the emperor realized that mass production of firearms would be an excellent means to counter the battlemages.

Solid evidence, in my opinion! Given the context of Enroys supplied in the mod, it’s not too startling to see the firearms throughout Skyrim. The guns look fantastic.

With pistols and rifles both accessible, as well as the ability to make ammo at forges, they also look rather sleek.

Even some of the firearms have histories of their own. For instance, the Blades Handgun is a unique design built from Akavir’s blueprints and made for dispatching dragons in mind.

Just be sure you bring the correct ammunition! You don’t want to be aiming incendiary weapons at a fire-breathing creature.

Keep an eye out for more of our coverage of Skyrim! We’ve discussed a variety of posh community upgrades, including a mod that enables you to play out your furry fantasies and lifelike romantic rejections.