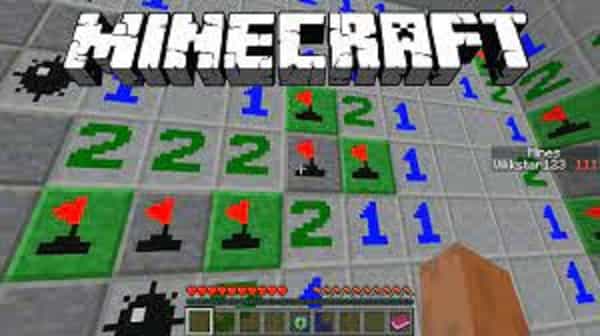 A Minecraft user created a playable Minesweeper game: One of the most exciting things about Minecraft isn’t just how big it is but how many different building mechanics there are. This means that you can build anything you can think of.

It doesn’t matter how long Minecraft has been out because fans will always find new things to build. Whether a complex building or a Redstone system that stumps them. There are also ways for players to make their own game inside the blocky world, and that’s what one person has done.

YouTuber Crafty Master man made a video that PC Games saw. In it, they show how they made something in Minecraft that’s not only complicated but also very big. When they took part in a building contest, they decided to make a massive version of the classic Windows game Minesweeper that would be much bigger than the original version.

The video shows the thought process that went into building it. It didn’t work out, but Crafty Master man did their best to make two versions of the puzzle game that has been around for years. They also made a map showing the Minesweeper board in the player’s hand, which is a clever idea.

In Minecraft, Redstone is the equivalent of circuitry and can be used to make all kinds of exciting things. The task was to make something with only Redstone. When Crafty Master man wanted to make Minesweeper work. He had to figure out how the game would show if any adjacent squares had mines and put flags. Just like in the original game.

This is what he did: It took a lot of time, but they could do it and have made both versions available for download. The second one is more detailed, and it can find here.

Minesweeper has almost completely forgot because it doesn’t come with modern versions of Windows. To many, it’s a reminder of a time before the Internet as we know it today took off, which is why they still like it. It also shows how much power there is in the Mojang sandbox game. With someone recently making their version of Wordle in Minecraft. There is still a lot to learn and new projects to take on.

It’s not just about making things. Fans of Minecraft are still finding Easter eggs. Even though the game has been out for more than a decade at this point. Crafty Master man’s Minesweeper game is enormous, and it took a lot of work to make it.

Minecraft is available on PC, PS4, Switch, and Xbox One.